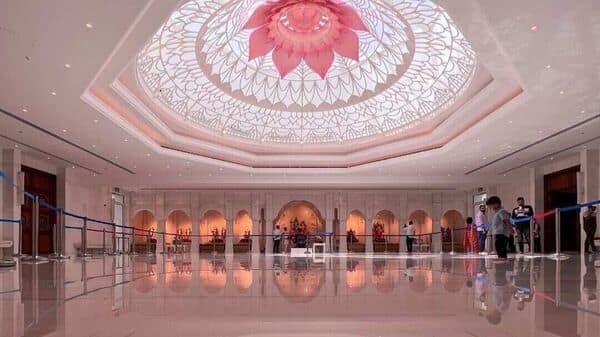 A new Hindu temple was inaugurated in Dubai on October 4 by the UAE’s Minister of Tolerance, Sheikh Nahyan bin Mubarak Al Nahyan. The Sindhi Guru Darbar Temple, one of the oldest Hindu temples in the UAE, was expanded and inaugurated a day before the Dussehra holiday. The foundation of the temple was laid in February 2020.

The temple has welcomed people of all religions and has allowed devotees and other visitors to enter to witness the 16 deities and other inner workings, according to Gulf News. The temple is open to the public from today, the day of the Dussehra festival.

The hourly number restrictions that are in place now will not apply to those who have been nominated to visit the temple on October 5 through the official Dubai website. Additionally, the Dubai temple has a large capacity to comfortably hold between 1,000 and 1,200 worshipers every day.

The temple, which welcomes devotees of all faiths, was lightly opened on September 1, when thousands of tourists were allowed to see inside its white marble. It has bells on the ceiling, Arabic and Hindu geometric patterns on the exterior, and decorative pillars.

On the day of the temple’s convenient opening, the management activated the website’s QR code-based booking system. Since its opening, the temple has seen many visitors, especially on weekends. According to the article, restricted admissions have been restricted by appointments with QR codes to control crowds and ensure social distancing.

The main prayer hall, which also has a large 3D printed pink lotus covering the hall in the middle, is where most of the deities are kept. The official website of the new Hindu temple in Dubai lists its opening hours as 6:30 am to 8 pm.

The temple also installed the Guru Granth Sahib, the Sikh holy book, in August. It is located in the “Village of Worship” of Jebel Ali, which also includes the Guru Nanak Darbar Gurudwara and a number of churches.