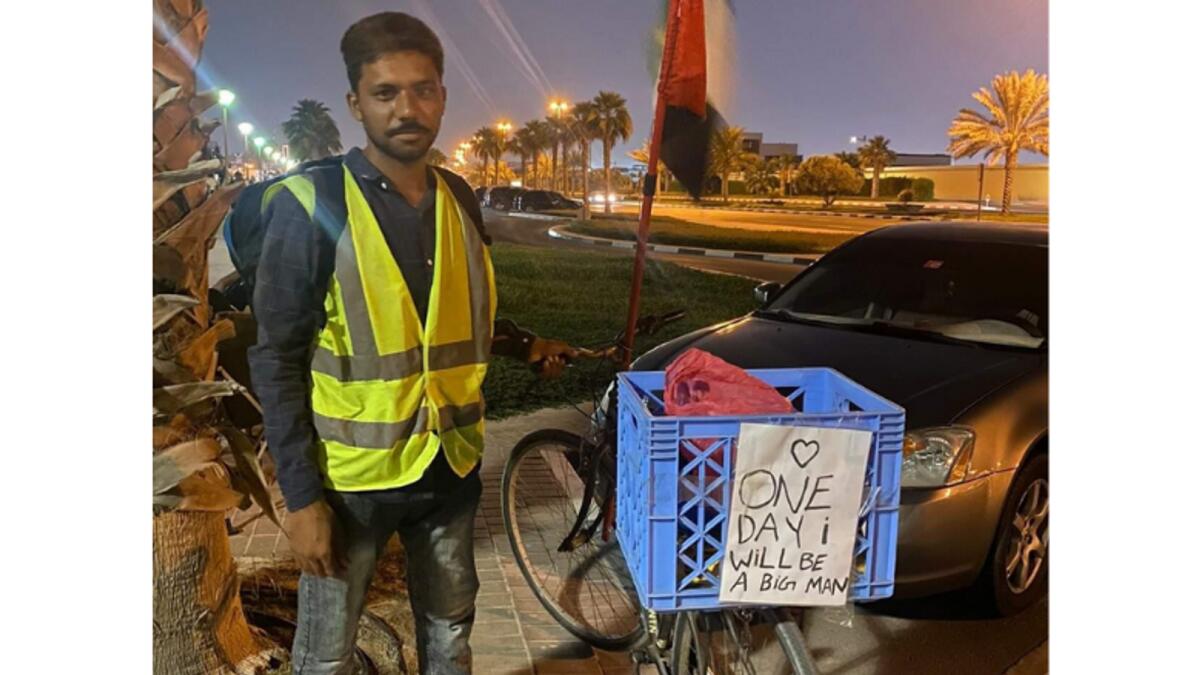 “My life changed after the birth of my daughter,” he said.

Shebaz became famous overnight on social media when a video about him went viral on TikTok. The video shows him waiting at a traffic signal with his bike with the catchy words ‘One day, I’ll be a big man’ written on the back.

Hailing from Multan in Pakistan, Shebaz arrived in the UAE in February this year for a better life, and started working as a freelance electrician. Before he got the famous basket-carrying bike, he walked around Deira to work.

“I got my bike four months back, and when I got it, I wrote the words,” said Shebaz.

“Many took my videos and uploaded them on their social networks. Emirates Draw discovered this video and started a search for me,” said Shebaz.

Emirates Draw had announced their support to bring his ‘one day’ closer than ever and called on the community to help find Shebaz.

They found the ‘Bicycle Man’ and invited him to attend Friday’s live game, where he was given 36 free tickets worth Dh540 in hopes of changing his life and bringing him one step closer to his dream!

“I was parking my car near the Al Mamzar beach. A woman came to me and informed me that people in the Lot are looking for me to help me get closer to my dream,” said the Pakistani citizen.

Indeed, my hopes have been boosted by the birth of a girl and getting the lottery tickets at the same time. “God’s plan is better,” said Shebaz.

The expatriate Pakistani is yet to participate in the draw and is waiting for his bank account to be opened. “I haven’t decided the numbers to choose in the draw, but whatever number I choose, it will definitely be related to my daughter,” said Shebaz.

After completing a Diploma in Homeopathic Medicine and Surgery, Shebaz worked as a doctor in his native area with his father. “I have a good understanding of general medicine, there are several things I would like to start if I win the Draw.”

Shebaz is ready to start a general medical business after obtaining a medical license as approved by the UAE government and working for the betterment of “his family, friends, and humanity regardless of race, ethnicity, language, etc.”

Speaking about his dream of the UAE, he said, “Dubai is a city of dreams for millions, and their dreams are coming true here. People come here for the good life, and so do I. The leaders of the country believe in helping millions of people around the world. They are my inspiration, and I want to follow their path when I grow up,”

“If I don’t get a win in the draw, I will make it one day,” concluded Shebaz.