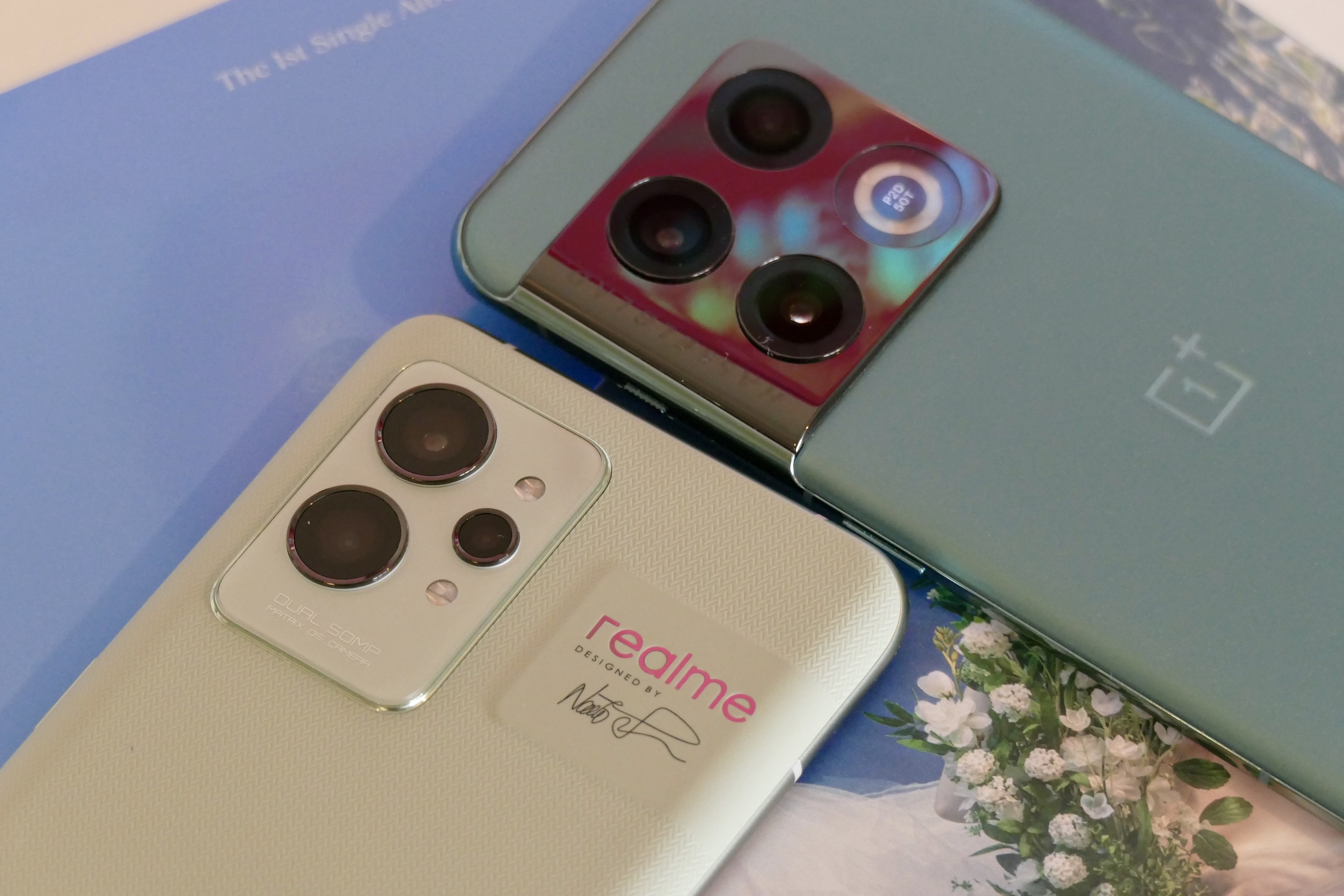 What happened to OnePlus? Once the darling of savvy smartphone bargain hunters, the company lost its way with the latest OnePlus 10 Pro and left itself vulnerable to usurpation by cheaper newcomers.Worse (for OnePlus, not you) is the Challenger from within. It’s the Realme GT 2 Pro, which is actually the same phone as the OnePlus 10 Pro, just cheaper.

Let’s take a look at the two together and see why saving some money and ignoring marketing is the smart decision here.

The OnePlus 10 Pro has a Galaxy S21 Ultra-style wraparound camera module with a matte Gorilla Glass 5 back, Gorilla Glass Victus on the screen, and plenty of Hasselblad-branded camera lenses. All of these are established tropes for flagship smartphones, so you know what you’re getting with the OnePlus 10 Pro.

Pick up the Realme GT 2 Pro, it’s thinner and lighter, but the most notable difference is the biopolymer back panel. It’s made from sustainable materials and has the look and texture of high-quality paper. Realme collaborated with industrial designer Naoto Fukasawa on the overall design, and his signature even appears on the device.

OnePlus is known for its high-performance screens, so can Realme compete, or even come close? That’s bad news for OnePlus and good news for you. They both use the exact same 6.7-inch, 3216 x 1440 pixel, 120Hz LPTO 2.0 AMOLED screen with one billion colors and HDR10+ certification. The only difference is that the Realme GT 2 Pro’s screen is flat, while the OnePlus 10 Pro’s is curved.

They have the same level of adjustment across multiple color modes, a choice of Display P3 settings for a wider color gamut, and a way to change color temperature. I don’t see any difference between them when watching 4K YouTube videos, nor when using the OS or apps. The OnePlus 10 Pro’s speakers sounded deeper and more rounded, while the GT 2 Pro’s sound was tinny.

Flat screens are generally harder to use in bright sunlight, and the GT 2 Pro is more susceptible to reflections than the OnePlus 10 Pro. On the other hand, some people, especially gamers, prefer flat screens. Visually. when you put them together. In terms of quality, you can’t say one is better than the other, that’s what really matters.

Realme calls its software Realme UI 3.0, while OnePlus calls its version OxygenOS 12. Both are built on Android 12, and both are basically the same. I don’t like either, I prefer Samsung’s OneUI or Google’s software on the Pixel, both are better designed, more reliable, and easier to use.

Both have the same Qualcomm Snapdragon 8 Gen 1 processor, and unsurprisingly, both phones fly. But when you look at RAM and internal storage, the Realme GT 2 Pro is a better value. The regular Realme GT 2 Pro comes with 12GB of RAM and 256GB of storage, but you’ll have to pay for the most expensive OnePlus 10 Pro to get the same storage. However, neither has a microSD card slot.

In short, there are issues with both operating systems, the phones use the same processor, and they have the same capacity battery and the same fast charging. Not only that, but the cheaper Realme GT 2 Pro phone has the same RAM and storage as the top-of-the-line OnePlus 10 Pro. Buying the cheaper one seems like a no-brainer.

This is where the OnePlus 10 Pro should definitely let people know about its higher cost. After all, it bears the Hasselblad name and represents not only the expertise of the big-name camera maker, but also a significant investment by OnePlus. The Realme GT 2 Pro doesn’t have such an endorsement, so it certainly can’t keep up, right?

Well, it can be in features and specs. Both have a 150-degree wide-angle camera and a 50-megapixel wide-angle camera, but not the same as the 50MP main camera on the Realme phone and the 48MP main camera on the OnePlus. The OnePlus has an 8MP telephoto lens for 3.3x optical zoom, but the Realme doesn’t. Instead, it has an unusual 3MP microscope camera that shoots at 40x magnification.

Check out the 150-degree wide-angle and key shots taken by every phone in our gallery. The wide-angle photo and main photo show how the OnePlus camera takes a more subtle approach to white balance, as well as some more vibrant greens and yellows, but I wouldn’t say it’s an overall better photo in either case. Realme’s landscapes and sky shadows on the horizon are more natural.

At night, the Realme is definitely brighter than the OnePlus, showing more detail. In the photo of the roof, Realme shows a few bright stars in the sky that are missing from the OnePlus photo, while in the photo of the stone trough and white flowers, Realme’s photo is sharper and more focused.

The cameras represent the biggest difference in specs and performance between the two phones, but neither is much better than the other, and the cheaper Realme phone takes great photos in almost every situation. Aside from the unfortunate omission of the telephoto camera (not that the 8MP telephoto on the OnePlus is great anyway), it’s going to be very satisfying.

The OnePlus 10 Pro and Realme GT 2 Pro are pretty much the same phone, just under different brand names. How did this happen? They were all conceived under the close watch of BBK Electronics, and you can imagine it taking place in the same conference room in the same office building, just on a different day, with different marketing teams doodles on whiteboards.

It’s an illusion of choice, and there’s no real benefit to buying the more expensive ones. A cynical look, these two (three if you count the very similar Oppo Find X5 Pro) just live side by side with each other to take away from those talking about a vibrant community, brand loyalty based on past hardware, or nifty marketing People squeeze more money where people either dare to jump or never settle for a photo?

our suggestion? Don’t fall for marketing. Only buy cheap ones. They have the same drawbacks, and because they both use the same software, you won’t be using any major camera or battery features, nor will you compromise on performance or design. As good as the OnePlus 10 Pro is, the Realme GT 2 Pro is a better representation of what we used to love about OnePlus — its low price, the latest processor, and interesting everyday camera features.