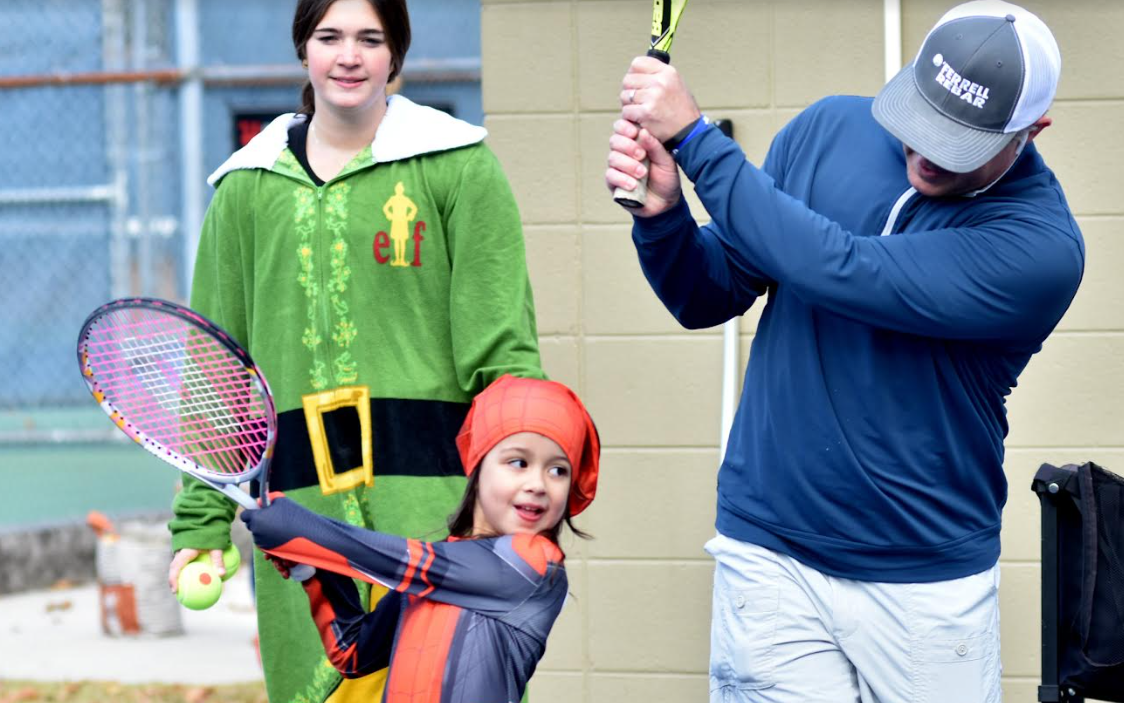 For the Birmingham Times

Tyson Peoples was dressed as a baseball player, his brother Trent was a ninja in a black suit, and Eden Robinson, like his sister Waverly Robinson, was an anime.

The USTA (United States Tennis Association) Southern schedules these events in October and November. Similar events took place in May during National Tennis Month and the regional sports leader didn’t want to miss the opportunity to have more fun while exposing more young people to the sport.

Saturday’s tennis festival was organized by the Birmingham Area Tennis Association, a LETT (Learning Excellence Through Tennis) programme. Its mission is to improve the lives of children through tennis and education by developing self-discipline and self-esteem, increasing positive social skills and improving physical fitness.

The event at West Homewood Park was Halloween-themed, with some attendees coming dressed as their favorite characters. A skeleton with jack-o-lantern glasses and a tennis racket greeted the young players as they entered the court.

Even lead instructor Leighann Morgan got in on the act, wearing a bald gray hairpiece and white lab coat as if she were Albert Einstein. It was ironic, she admitted, because she wants the youngsters she teaches to “play smart”.

“I’m not telling them to play Einstein, but we really want them to use the skills we’ve learned over several weeks,” she said. “Tennis is not a sport where it is only a moment. There are plenty of moments that build your match. We try to develop their general knowledge of tennis so that when they step onto the court for a match it is as if they have studied the test and are ready to win the match.

In this sense, each visit to the court is a test of capacity.

“You try to show everything you’ve learned,” Morgan said. “But a game is also different from just showing what you’ve learned because it’s been a whole mental game. Do I know what to do in this situation? And under stress? And a little bit of pressure? Then I understand it?

Suzy Harris is Executive Director of BATA (Birmingham Area Tennis Association). The aim of Saturday’s event was to add fun to the normal routine of the tennis instructional curriculum, she said.

“It’s to expose them to tennis. If they want to progress in tennis, we try to help them if they want to start playing JTT (Junior Team Tennis) matches. We don’t want to throw them into a tournament to start,” Harris said.

“Some of our kids have been on their high school tennis team for the past year, so they’re working on improving their skills for that,” she continued. “Some of them have other sports so they’re not always there.”

But it’s not just about competition. There is also a social aspect, said the executive director of BATA. “A lot of these kids have become friends, but they don’t go to school together. They want to go out and see each other.

Mercy Ndegwa has been playing tennis for four years and was exercising on Saturday. But she also enjoys teaching sports to young children. “I love kids and I love helping them grow, like my coach helped me grow,” the 16-year-old said.

Mercy and her brother John attend Woodlawn High. Harris of BATA said efforts are underway to form a tennis team for the Colonels. She added that a teacher from Carver High works with BATA and hopes to form a team at this school in north Birmingham.

“We held a tennis event there,” Harris said. “We had about 50 or 60 kids showing up. We had it in the yard and they just came out during lunch. I think they want us to do another one, so we’ll do it on their tennis courts.

“I think they were excited about the costumes and stuff,” Harris said.