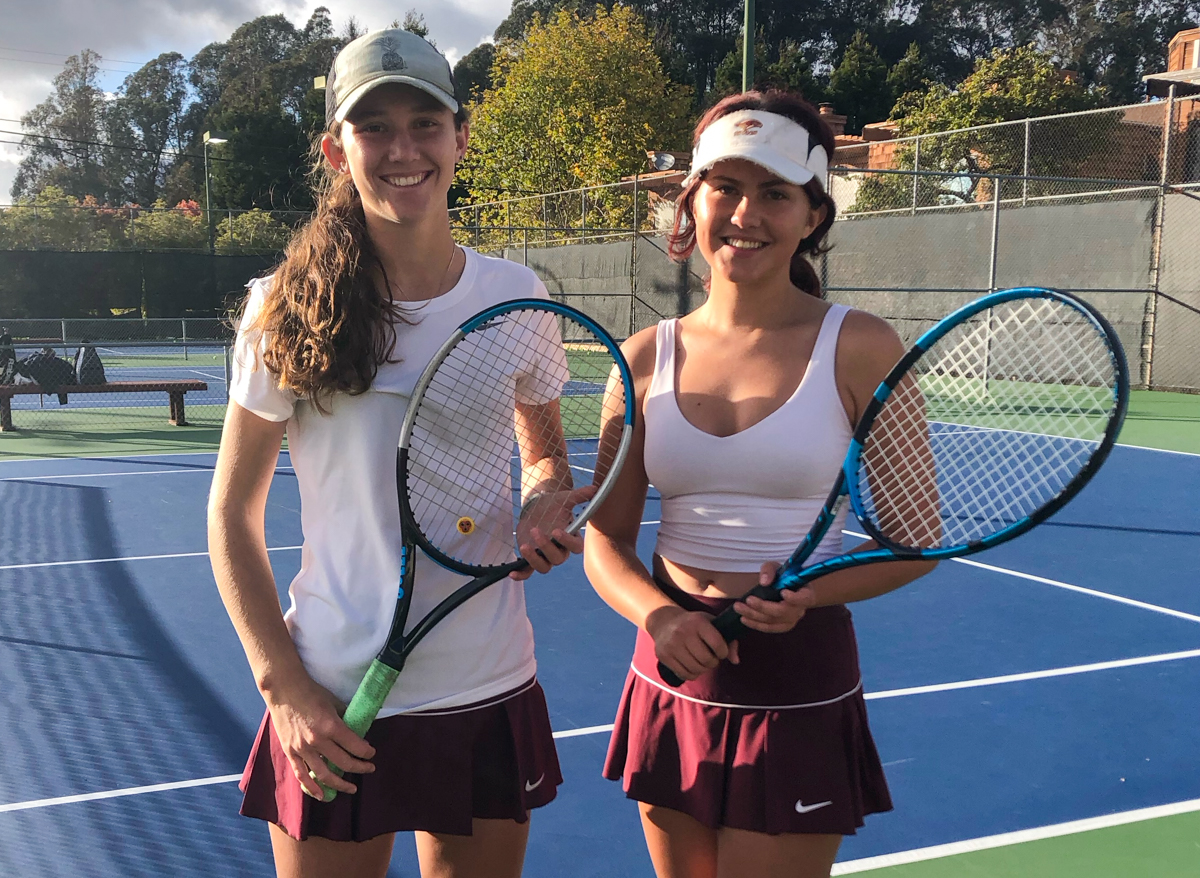 Scotts Valley senior Emma Dyc-O’Neal and sophomore Sofia Niklaus have been busy this season handling business on the tennis court as two of the best singles players on the Falcons women’s team. .

However, things took a tiny turn when they teamed up to compete in the Mid Coast Girls’ Doubles Tennis Championships at the Bay Club Courtside in Los Gatos on November 15.

Dyc-O’Neal and Niklaus were knocked out in the second round by the No. 3 double-seeded team of Cupertino High’s Nadia Lee and Anika Malik in straight sets (6-1, 6-0).

“It was definitely a new experience since we never got out of the league [play]”, Dyc-O’Neal said. “It was exciting but it was definitely a whole different level of play up there… They were nice but they were so much better than us.”

The mighty Falcons duo, however, cruised to a first-round victory over the unseeded doubles team of Rachel Chen and Amy Tran of Piedmont Hills High in straight sets (6-4, 6-3).

Niklaus said it was nice to be able to advance to the first round, but knew it would be difficult to advance further.

Prior to the CCS tournament, Dyc-O’Neal and Niklaus won the Santa Cruz Coast Athletic League Doubles Championship at Imperial Courts in Aptos on November 3.

Dyc-O’Neal said she and Niklaus are both athletic and versatile with what they can do on the court, especially because they usually play in singles matches.

“We communicated well and we were both pretty positive, so we stayed happy,” Dyc-O’Neal said. “Sofia is pretty good at net and she’s tall, so she can get stuff, and I have good groundstrokes.”

Dyc-O’Neal held first place in singles for the Falcons and Niklaus remained in fourth place during the regular season.

Scotts Valley coach Scott Goodrich said both players are excellent athletes who are also on the women’s lacrosse team.

“Both players are mobile and they have good skills overall,” he said.

However, she mentioned that having an experienced partner like Dyc-O’Neal made her job a little easier.

“It’s useful for me because she knows a lot,” Niklaus said. “She can teach me and that kind of benefits our whole team.”

At the start of the season, Goodrich had the idea that they would be a competitive team in the SCCAL due to returning players such as seniors Veronica Farquhar, Olivia Johnston and Dyc-O’Neal.

Farquhar said she wanted to finish the season strong and go into the season in a good mood, really trying to give it her all.

“I would say we were able to play well because we get along well as a team in general and we all take care of each other, which I think is really important,” she said.

The Falcons finished the league’s first round undefeated, including a big win over Aptos that gave Scotts Valley momentum in the latter part of the season.

Johnston thinks this year’s band had a better bond with each other and noticed more people were focused whenever it was time to play.

“Showing up to practice on time, I think little things like that led us to more success in our previous years,” she said.

The Falcons finished with an 11-2 overall record and a 9-1 league record, tied with Aptos. Both teams were forced into a playoff game to determine a league champion.

Scotts Valley was edged out by Aptos, 4-3, in the Oct. 31 win-win game at Soquel High School.

“Everyone worked hard, everyone got better, and we had fun every step of the way,” Goodrich said. “We will certainly miss our seniors who have shown great leadership, but we have a great group returning so the future is bright.”

The varsity team had just 13 players, which is the lowest attendance in Goodrich’s third year with the program. On average, he had as many as 17 players in 2020 and 21, finishing 4-6 and 6-4 respectively in the league.

They may have had a small drop, but he thinks it’s still a good mix of talent, including juniors Samantha Warner and Maya Bensen, sophomore Erin Szymanski and senior Oona Poikonen – a Finnish exchange student who had never picked up a tennis racket before joining the team.

Goodrich also realized that they had a strong group of freshmen in Julia Kennedy, Maya Wexler and Riya Kuriakose who were also added to the mix.

“At the start of the season, I pointed out to one of my assistant coaches that this team is very focused and very mature,” Goodrich said.

Stella Chaney, a junior, said she thought the seniors were good leaders this year and really brought the group together.

Not only were the upper class men great players, but they made it seem like a close bond with everyone, she said.

“It definitely creates a more supportive environment and that’s part of why we’ve done so well this season and why it’s been so fun,” Chaney said.

Farquhar, who was part of the team for all four years, was always looking forward to seeing familiar faces, as well as new faces.

There was a feeling of nostalgia when she was in first grade, walking in and seeing how some things changed and some things stayed the same.

“It’s all really touching and important to me,” Farquhar said. “Different practices and I’m looking forward to it, and being passionate about it, I think that really reflects in all of our game.”